You can download the abstract in the «docx» format at the end of the description.

The inventor of the diesel engine is Rudolf Diesel, a German engineer. Creator of the internal combustion engine with compression ignition. A diesel is a thermal engine in which the conversion of the chemical energy of the fuel into the heat is carried out in the middle of the cylinder. The combustion products obtained in the cylinder, having a high temperature and pressure, expanding, move the piston, which through the connecting rod sets the rotary motion of the crankshaft. Thus, inside the cylinder is the transformation of fuel energy into mechanical work. The diesel consists of two mechanisms, a crank shaft and a gas distribution mechanism, and auxiliary systems: fuel, lubrication system, air supply system, cooling systems.

Tact — one movement of a piston in a cylinder from one extreme position to another.

The working body (energy carrier) of the ICE is the heat carrier (gas), through which the engine performs mechanical work. The working body is formed as a result of combustion of fuel.

Working cycle — a set of thermodynamic processes occurring in a cylinder in a definite sequence.

The cylinder’s working volume — is the volume describing the piston when moving from UDP to BDP.

The full cylinder volume — is called the volume above the piston located in the BDP. 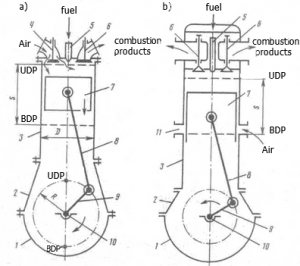 The principle of the 4-stroke engine (a):

When the piston 7 moves down (tact I), the air is fed into the cylinder through the open inlet 4 valve. When the piston moves up (tact II), the valves in the cylinder are closed and compression occurs. At the end of this trick, the diesel fuel is injected into the cylinder, which is self-igniting, because the pressure and temperature are sharply increasing. The gas presses on the piston and, while moving it down, carry out work (tact III). The next piston stroke (tact IV) releases the exhaust gases from the cylinder. The translational movement of the piston through the connecting rod 8 is transmitted to the crankshaft 10 mounted in the supports of the crankcase 2, which converts it into a rotary motion.

Principle of work of 2-stroke engine (b):

At the end of the tread, the injector 5 injects fuel that is self-ignited due to high air temperature and burns out. The gas pressure in the cylinder is sharply increased. Under pressure of gases the piston from the upper position moves to the bottom, carrying out useful mechanical work (II tact-working). At the end of the tread, the exhaust valves are first opened. Exhaust gases are exiting from the cylinder to the exhaust manifold. Their pressure in the cylinder falls. With further advancement down the piston will open purge windows 11 and fresh air begins to flow into the engine cylinder. There is blowing and filling the cylinder with air. Thus, in a two-stroke engine, the working cycle is carried out in two piston strokes, or in one revolution of the shaft.